Reflections from a Church Treasurer

Mission Sheds get a fresh coat of paint for 2021

CAPTION: Rev'd Sam Leach said he'd do the climb again if he could

A Devon vicar has overcome his fear of heights to climb the 165ft spire of his church to raise funds for community outreach.

The Reverend Sam Leach was joined by three other members of the leadership team to climb the steeple of St Mary Magdalene church (known as St Mags) in the centre of Torquay.

A crowd turned out to watch the climb on Thursday 20 August, with dramatic drone footage captured by a member of the congregation.

For Sam, it was a definite case of stepping out in faith. “I really don’t like heights”, he said afterwards.

“I hate looking-up, I get dizzy, so this was well out of my comfort zone. 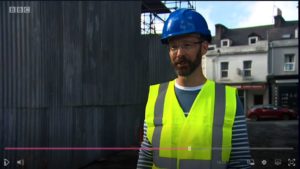 Sam Leach talks to BBC Spotlight just before the climb

“All the community were here, they were cheering us on. It was one of the first times we have all been able to be together.

Sam said he had been more nervous about the climb a few weeks ago than on the day and had been helped by “good preparation and prayer”.

The climb was possible because external repair work is being carried out to the steeple as part of a National Lottery Heritage-funded project.

It involved climbing 10 scaffolding platforms and then an 80ft ladder to reach the top.

Philip Scorer of Vitruvius Conservation who was overseeing the climb told BBC Spotlight “They did amazingly well, it’s quite breezy today… so I thought they were very brave to go up there.

“I think they are part of such an amazing community here that that’s what drove them on.”

The climb raised funds to carry out £7000 of repairs to the church kitchen, which is used to run a community cafe. 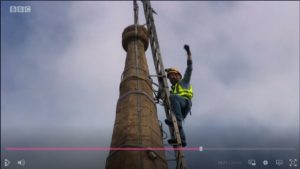 A mountain-top moment as Sam reaches the top of the spire.

It forms part of the church’s outreach to vulnerable groups in Torquay including the homeless and those living with addiction.

“We love to welcome people to St Mags and be hospitable,” Sam said.

He thanked those who had supported the climb and turned out to watch it. “It was good fun and raised a bit of money for our community.”

He even admitted he would do the climb again if he had the chance “I loved it. The views over Torbay and the town we love, Torquay, were epic!”